The Women that made Space Inspired Textile Art Possible.

One of Nasa’s most notable achievements was the moon landing in 1969. According to Space.com, during the Apollo programme women made up only 5% of Nasa’s entire workforce which consisted of around 400,000 personnel. Despite the crucial roles women played, their achievements are often overlooked. This International Women’s Day comes just weeks after the death of Katherine Johnson, an African-American woman now recognised as an ‘American Hero’ due to her work at NASA. To honour her, we wanted to take a look at her pioneering legacy and pay tribute to the  vital contributions she made to many space missions.

Although the moon landing itself was an all-male team, there were women behind the scenes making vital contributions. There were seamstresses, administration staff, spacecraft designers, software engineers, and mathematicians known as ‘computers’, responsible for calculating flight trajectories. 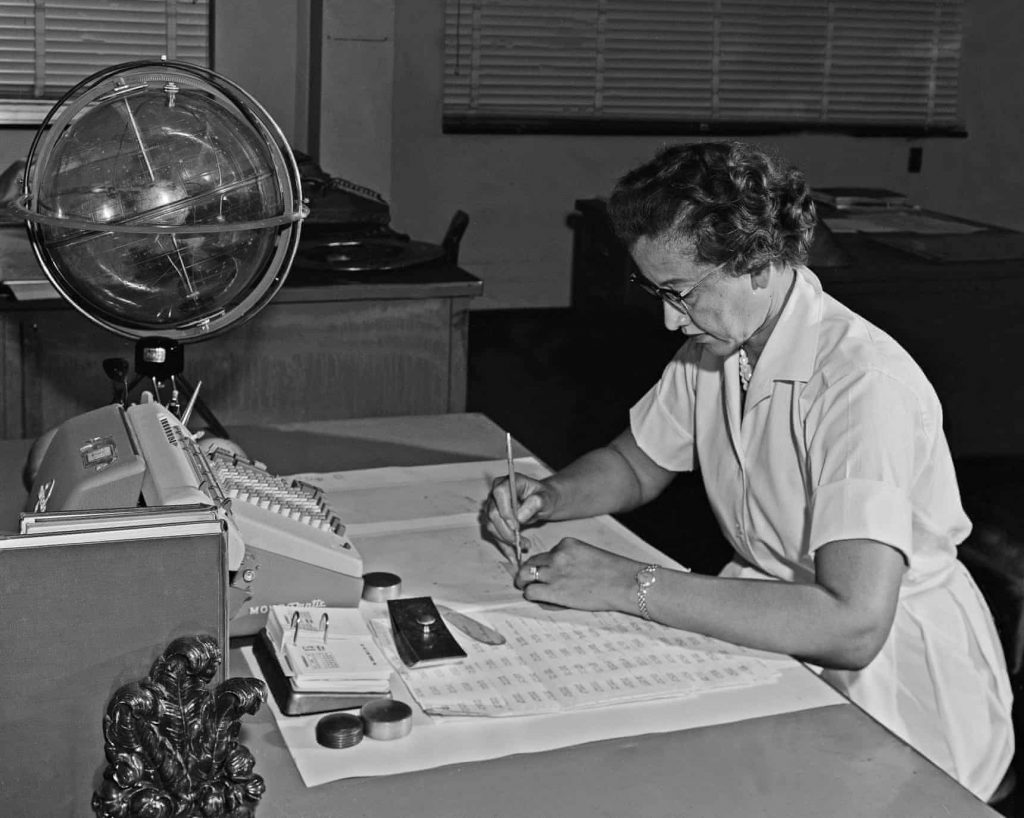 As a gifted Mathematician, Katherine Johnson was able to master complex manual calculations and helped pioneer the use of computers to perform the tasks. Her work includes calculating trajectories, launch windows, and emergency return paths for Project Mercury space flights. She also played a vital role in pioneering programmes helping to put the first American into space and the first American into orbit. She also established rendezvous paths for the Apollo Lunar Module and command module on flights to the Moon.

Born in White Sulphur Springs, West Virginia, in 1918, Johnson had a gift for Mathematics, a gift that would see her graduate from high school at just 14. She was the first black woman hand selected as one of three black students to integrate West Virginia’s graduate school during America’s period of segregation.

She worked for NASA for 33 years. Not only was her work pioneering, but as an black woman her very existence at the organisation was a breakthrough. In 2015, at the age of 97, Johnson added another extraordinary achievement to her long list: President Barack Obama awarded her the Presidential Medal of Freedom, America’s highest civilian honor.

Johnson died a few weeks before international Women’s Day, on February 24, 2020, at age 101. Following her death, Jim Bridenstine, NASA’s administrator, described her as “an American hero” and stated that “her pioneering legacy will never be forgotten.

Johnson legacy will continue to inspire generations of women and girls interested in space exploration and other STEM subjects. Her work has undoubtedly had a wider impact on the artistic world too. Her contributions have allowed us to gain a better understanding of space; a subject so many artists are inspired by.  As a way of honouring Katherine Johnson we wanted to share the work of a few artists inspired by the Universe.

As a decorative textile artist, Karen lives and works in the West Midlands, UK. Her artworks are visual transcriptions of the beauty she sees in the wonder of the universe. Needless to say her work is greatly inspired by space and the Cosmos.

‘My stitches are a way of exploring the beauty of the universe in terms of structure, composition and texture. A homage in fabric. These dyed, collaged and stitched embroidered pieces are patches of the universe and my expression of the magnificence of the Cosmos and all it has to offer in terms of a visual experience.’ Karen Rose. 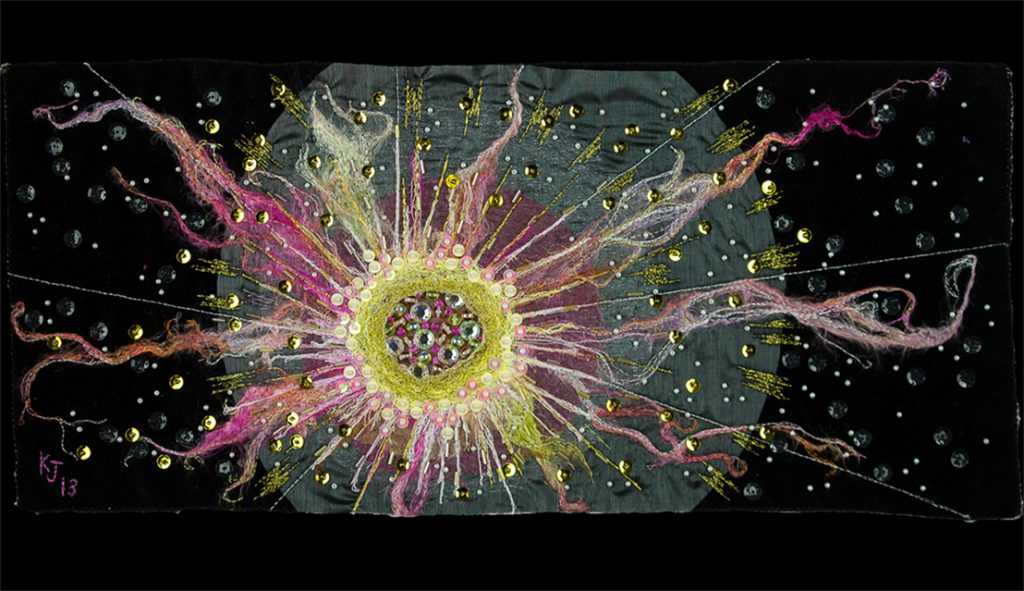 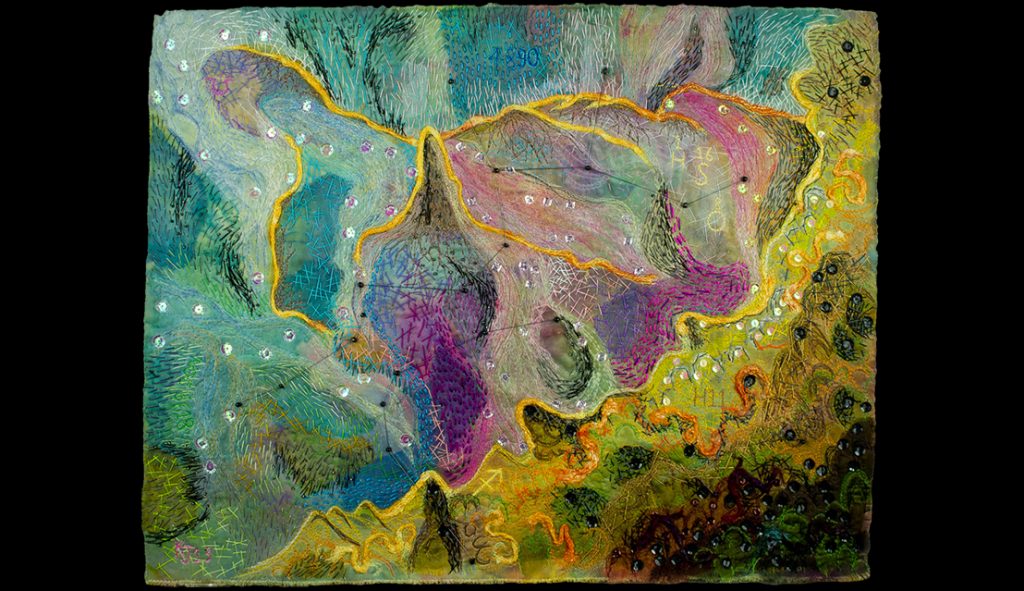 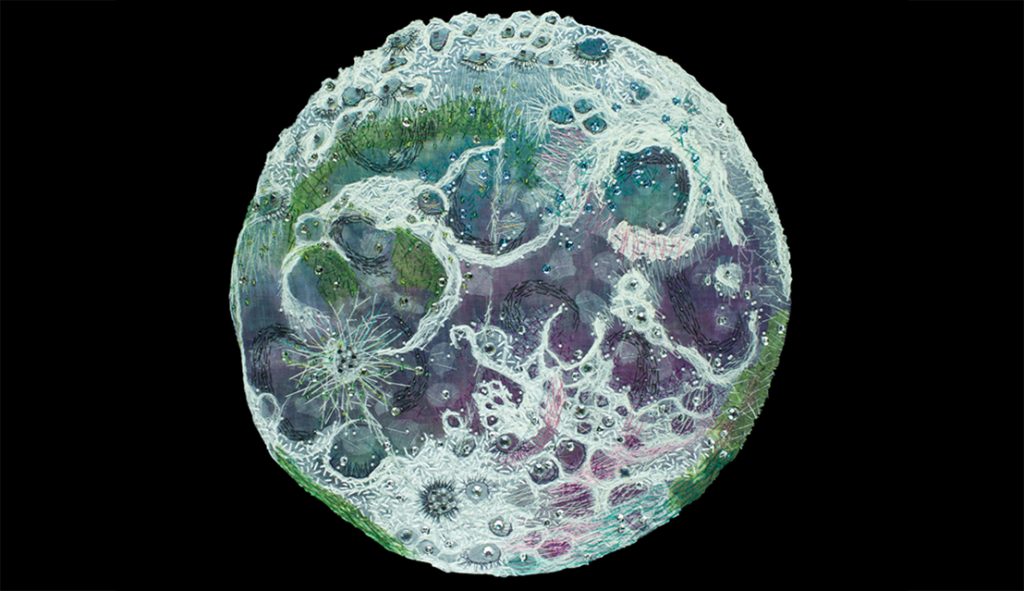 Based in Northern Canada, Margaret says that it was her love of fabric, texture and colour that attracted her to textile art. She began her career as a seamstress before focusing on recreating Northern Landscapes. In 2008 her subject matter changed to cosmic images afer inspired by images taken by the Hubble space telescope. She uses glass beads of various sizes and designs to capture the shimmering beauty of her subject matter, which are typically stitched onto black velvet or canvas. 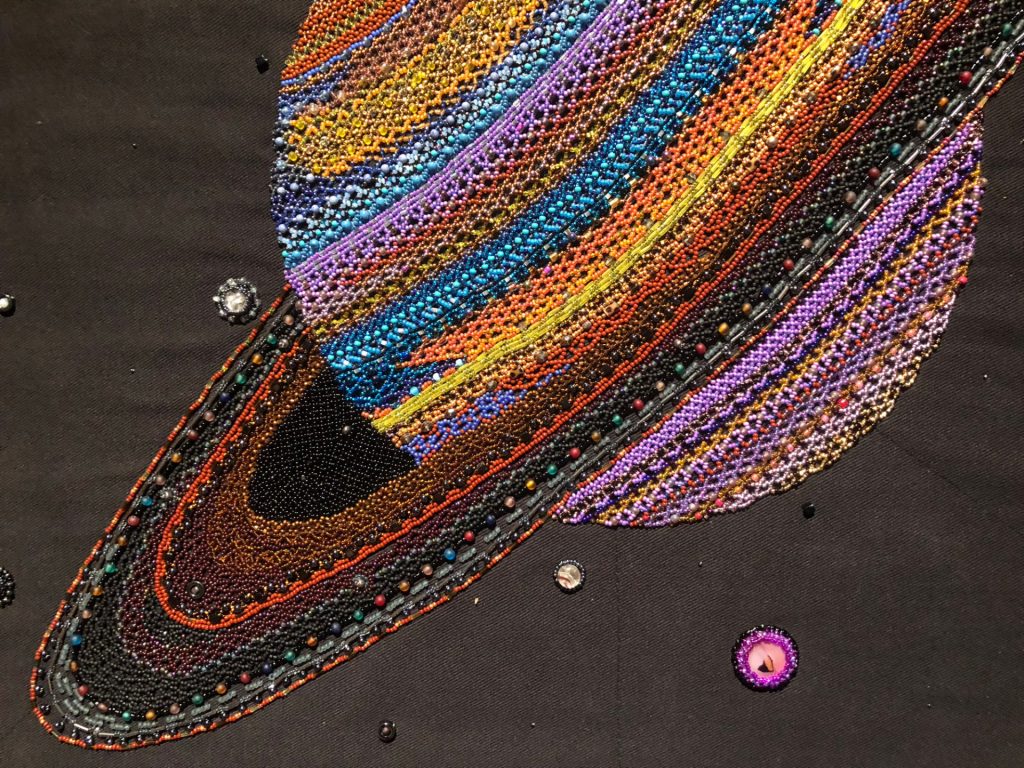 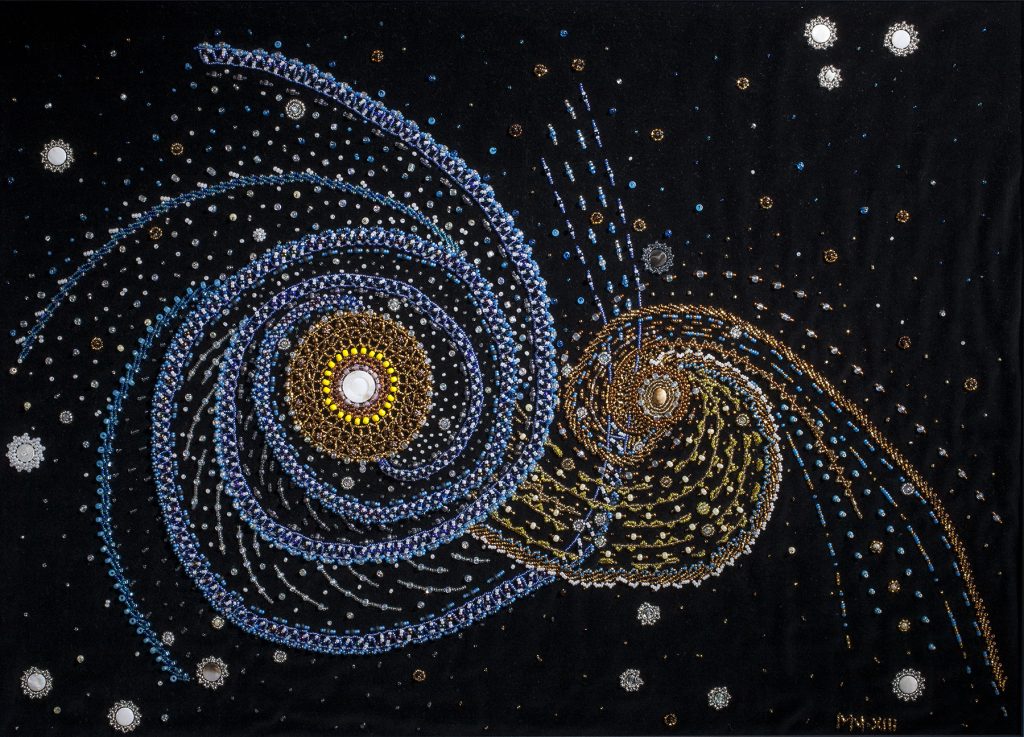 Michelle trained in Embroidered Textiles at Loughborough University and is currently working from a studio at The Ferrers Centre for Arts and Crafts, in Staunton Harold on the Leicestershire/Derbyshire border. As well as exhibiting her work she runs several workshops each year.

Her creative pieces are rooted in her love of nature, anthropology and spirituality.

Her pieces are made from old fabrics which she transforms into fabric collages. Each piece explores the reflective and tactile qualities of natural fibres, silk, linen, wool and cotton. The stitching is a mixture of free machine embroidery made on a domestic sewing machine and hand stitching. 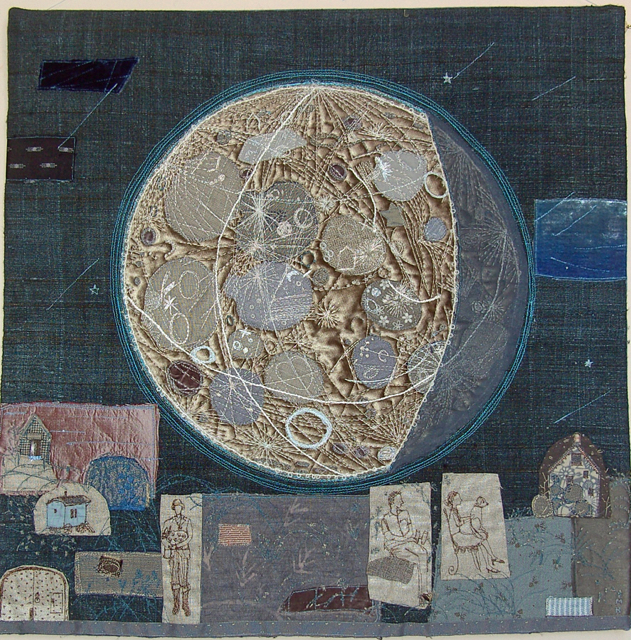 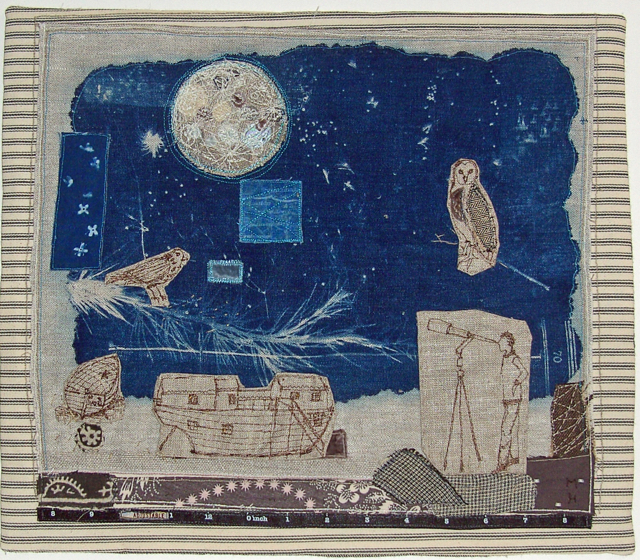 Listen To Our Podcast Textile Artists Inspired by Nature You HAVE To Follow

No spam, just beautiful inspiration from leading textiles artists and work from our students.

Begin your stitch journey and unlock your full potential.

As a highly skilled Hand Embroiderer and artist working in...

We’re really pleased to bring you something a little different!... Cassandra Dias is a true inspiration. As a new artist...

Next week we will be welcoming lots of new (and re

How Lovely is this??!!⁠ ⁠ Reposted from Hand K

@melaniefritz_textiles recently shared some of the

We will be holding two live Q&A sessions next week

Use this WeTransfer Link to
Submit Your Work
By continuing to browse the site you are agreeing to our use of cookies.
0
0
Your Basket
Your basket is emptyEnrolment Portal
Enrolment Portal